Last week was so much fun and so... therapeutic, that I decided to participate in MckMama's Not Me! Monday again this week. My goal: to one day be sitting down and thinking, "You know, I don't have a single thing to write about this week..." because that will mean that I didn't lock my kid in any cars or let my heart get broken by some medical drama or something equally shameful. It will mean that one week I will have done everything right. Done everything the way it's supposed to be done. You know, the normal way. (Don't worry; I'm not holding my breath. You don't need to call 9-1-1.)

So, without further adieu...
You may as well stop reading this. I'm not going to cop to washing a disposable diaper... or worse, washing it and then putting it in the dryer because I didn't want to deal with it. A totally organized, always responsible, never lazy woman wouldn't ever make a mistake like that. Ever.


And because I'm a super mom who is super lactatey and never supplements with formula, I wouldn't give my kids a bottle of formula every day to give my boobs a break (boobs, that, I promise that my son does not call "penises"). Therefore, I would never have the problem of storing my formula next to my canister of Coffee-Mate like this: 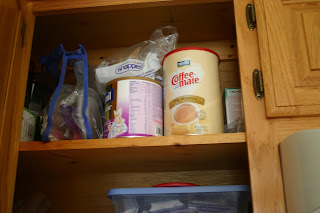 And furthermore, being as that is most certainly not a problem for me, I absolutely did not try to mix two scoops of Coffee-Mate into 4 ounces of water, wondering why it wouldn't dissolve. I mean, what would a formula scooper be doing in a canister of Coffee-Mate? It's not like the scooper is the PERFECT size for one cup of coffee... Or if it is, I wouldn't know since I don't use formula.

I didn't spend an entire day being angry at my very sweet husband because he mercilessly teased me for watching Grey's and Private Practice in his presence. Something like that wouldn't actually hurt my feelings, EVER. I can't imagine a universe in which I would have started sobbing in the kitchen, accusing him of taking "the one girly thing I allow myself to have in my life" away from me. There is no way I would over-react like that because, well, that's just silly.

...silly like having an itty bitty little crush on Mover Rich from The Imagination Movers. So I'm glad that I'm not at all in the slightest bit silly.

And as we covered last week, thankfully, I'm not the kind of person who would live in a roach-infested house. So I wouldn't have to spend several hours apologizing to my son and trying to explain to him why the "F" word shouldn't be repeated because it's not like I'd ever have to deal with a roach popping out of a box of sandwich bags and crawling over my hand, causing a string of F-themed curse words to spew out of my mouth.

Do you know what it's like to get so wrapped up in a college football game that the outcome literally dictates your mood for the rest of the weekend and you can be reduced to tears by a pathetic showing on the field? Gosh, neither do I! That's why I wasn't secretly relieved that Notre Dame didn't have a game on Saturday and I didn't have to be grateful that I could spend Saturday passively watching games and not grinding my teeth or pleading with higher powers to grant us an interception or complete a pass. I feel sorry for people like that... them and their crazy football allegiances. Pah!

Finally, I'm proud to say that I would never allow my nearly-potty-trained child to remain in his diaper after his nap because I forgot that he is nearly-potty-trained because that would just confuse him and make me look like I wasn't paying attention. In fact, if I were the kind of mom to make a mistake like that, I'd probably also be the kind of mom to run said diaper through the wash. Now that would be one total disaster of a person, wouldn't it?

Nothing like a few domestic faux-pas to make us all smugly glad to not be someone, right?

It's ok, I only have one child and I do all kinds of stuff like that. The other day, The utility sink into which my washing machine drains (it's an old house)started overflowing. So I start flipping out and shut the washer off and take the basket of clothes off of the corner of the sink. Swearing and about to call my landlord to tell him that his shitty pipes broke, I decide to check the drain of the sink. Sure enough, one of my socks had fallen out of the aforementioned basket and blocked the drain. Whoops.

So it's not just you, don't worry. We supermoms all have our "duh" moments =).

Watch the trailer for The Zookeeper at http://www.youtube.com/watch?v=z75b19HbpL8

Hahaha, thanks Erica :-) That totally made me laugh and not feel quite as bad! And since I'm "supermom" to three, am I allowed 3 times the "duh" moments?

Hey Babycakes...you've been given an award. Go to my blog to claim it! BTW...tell Big J that his WEPS also watches Grey's Anatomy. ;o)

Your blog is too funny. I'm going to follow, mmmmmmmmmmm-kay?