Finger-Foods: Make Ahead of Time and Freeze!

Because I've got all this disposable time on my hands, it's no object, of course, to prepare a meal for the adults, one for the picky toddler, and one for the babies every single evening.  Right?

Ideally, soon, I can just prepare a meal for 5 and cut up whatever we're having and that's the end of it.  We're close, but not there yet.  And I already find myself having to put way too much thought into food for Jack that I don't really love scouring the kitchen for things that constitute a well-rounded but mashable meal for those with 4 or fewer teeth.  I mean, when I have 3 plates and 2 high chair trays lined up on the counter and I'm plopping different food selections on each, I can imagine I'm just one hair-net short of a cafeteria worker.

Not my idea of a good time.  So, I pioneered (well, probably not, but I don't think I've seen or heard much about it before) a way of preparing this stuff ahead of time and freezing it just like the purees.

I started out just tossing a bunch of steamed, diced chunks of food into a container and putting it into the freezer.  What resulted was a mass of food that either needed to be reheated as an entire lump (and thus defeating the purpose of the endeavor) or I had to chip off a suitable chunk which resulted in mangling the food and making it much closer to the puree than the girls wanted.

So, I went back to (my) basics: food, ice cube tray, freezer.  I found that freezing the food pieces in the trays was okay, but I had to leave them in the trays and again, defrost en masse.  So, I added water to the trays.  Voilà!  I also tried nixing the trays and making little food packets with Glad Press 'n Seal (which is fabulous stuff if you haven't tried it) but that worked better for on-the-go situations and had a little too much waste in terms of packaging for my tastes, but it's not a bad way to go if you don't mind buying the Press 'n Seal.

This is what I did: 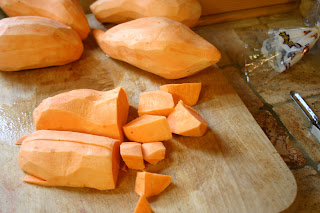 Step 1: Prepare your food according to your preferred method.  In this case, sweet potatoes, steamed. 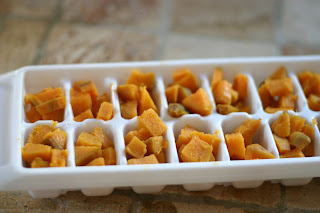 Step 2: Dice your food (if the pieces aren't small enough already) and fill ice-cube trays with the pieces.  In my case, I found that it worked best to cut the sweet potatoes a bit larger for steaming and then cut them down to a smaller size after cooking and cooling as they seemed to hold their shape a little better. 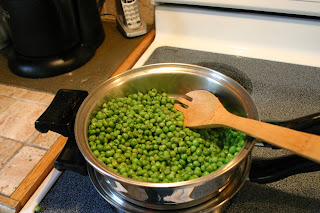 I also prepared peas but cooked them a TINY bit longer than for the puree to make them just a little softer for mashing. 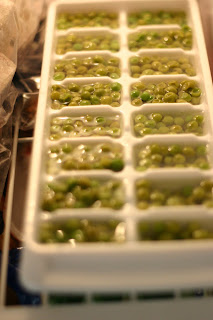 Step 3: After foods have cooled to room temperature, fill the tray with water and put in the freezer.  The water binds the pieces of food together and makes it possible to pop the individual servings out of the tray and into a plastic baggie for storage and easy thawing. 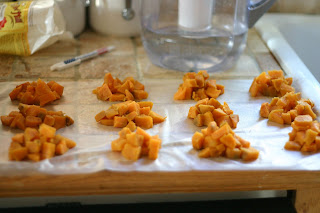 For this alternate method of storing, I just made piles of diced food on a sheet of Press 'n Seal with the sticky side of the plastic facing up. 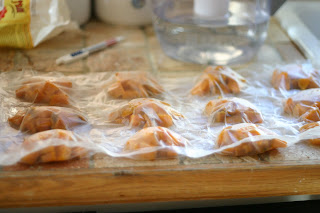 Then I simply put another (slightly larger) sheet over the top and sealed the seams, creating little food packs.  I later cut them into strips and put them in the freezer and was able to take out a strip of 2 or 3 pockets and toss it in a bag for lunch on the go. 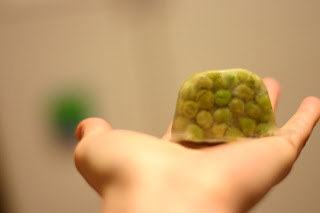 See?  A frozen pea cube.  Perfect!  I found that each girlie would consume one cube worth of peas and between 1 1/2 and  2 cubes of sweet potatoes at a time.  I just took out whatever  I was going to feed them for dinner at lunch-time and put it in a bowl on the counter to thaw, then drained off the excess water and served - no reheating necessary so as to preserve as many nutrients as possible! 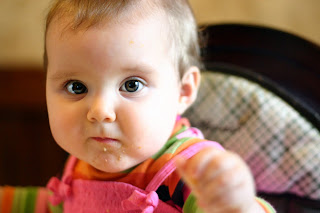 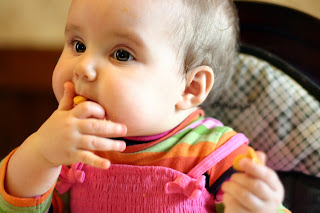 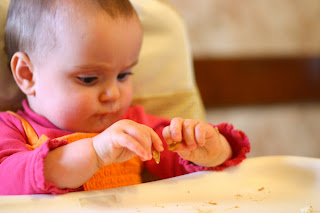 Nearing the end of a meal... playing with the food is always a good sign that she's full. 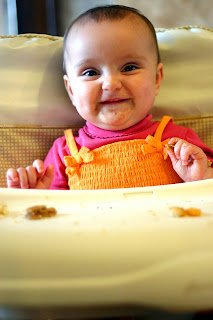 Jordan's happy fat kid face.
I tried this for sweet potatoes, peas, beans, cooked pears, peaches, apples, blueberries, and butternut squash.  I don't recommend cooked blueberries as a finger food - it was a royal mess.  Instead I just bought fresh blueberries and cut them into quarters.  It was way better.  If you do cook the fruit, don't cook it for as long as you would for purees - about 15 minutes in a 350 or 375 oven will be enough to soften the fruit and start to break down the sugars without making them too soft for inexperienced fingers to pluck off a tray, likewise with the squash.
I hope this helps you save a little of your valuable time and sanity - like with the pureed baby foods, it certainly saves money instead of buying the jarred Gerber Graduates type "meals" and cuts down on your prep time significantly on a day-to-day basis.  Just remember to keep all of your surfaces clean and germ-free during the entire process.
Have fun!
at 9:54 AM

Melis! I love how you prepare all of that for your daughters. You are so loving.

Me? Yeah, I love mine, but I'm not gonna lie...the lady at the McD's drive thru almost knows my name.

Great job, Mama! You are such an incredible mama and the kids are going to be so thankful for all of your hard work!!

Great idea and cute customers there! We're at the prepare one meal, everyone eats stage here so I suppose it's almost time to start thinking about another baby, ha ha ha. We wouldn't want things to get too easy around here!

I am soooo in that stage right now with L-boy. C'mon, kid, grow some more teeth! he only has 4 and he's 15 months! Great ideas. I'm gonna have to try them. Love your pictures, by the way! Your babies are so sweet!