Well, I was about to post an update over the weekend about how swimmingly well Enzo has been doing with his gimp. We even re-introduced Enzo and Jack - and this was Jack's reaction: 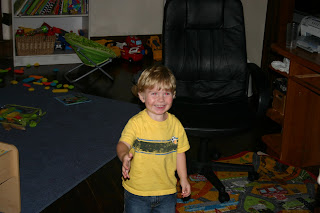 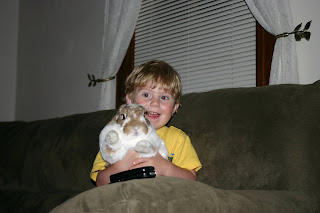 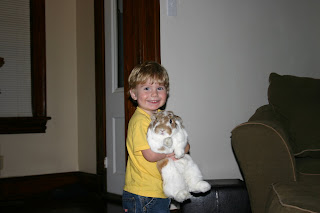 Adorable, eh? Enzo of course didn't stick around long as we didn't want to over-tax him so we put him back upstairs in his tower prison (the 3rd floor). This was a Wednesday or Thursday... Well, Saturday night, Justin went to bed and I headed up to feed and love on Enzo a bit before I turned in too. I got up there and there was no movement in the cage. I couldn't even see Enzo -heard no scuffling or anything. Panicked, I called down to Justin to inform him that Enzo was NOT in the cage, somehow. I thought perhaps his brief taste of freedom had inspired a jail-break. Well, there's not much ON the 3rd floor, and he was neither under nor behind ANYTHING. So I called down to lazy bones... erm... Justin... that "Enzo is GONE!" Then I saw him... stuffed motionless in the tiny space between the outside of the cage and the inside of the white fence we use as an "outer enclosure" to the whole thing. As Justin was **finally** coming up the stairs, I gasped, "Oh my gosh I think he's dead!" As I pulled him out of the cage, he started moving in what seemed like a seizure and I amended to: "Oh no, he's not dead, he's dying!" Freaked out that I was hurting him, I set him on the floor and he just "swam" in place on his side, flopping and rolling and flopping, with his head at an impossible angle that made me want to call an Exorcist rather than a vet. Justin's head emerged at the top of the steps in time to see this and he about lost it too. It took me a second, but I scooped Enzo back up and held him tightly to keep him from flailing and realized that one eye was totally bugged out of the socket and one was all but shut and his face was droopy on that side, so I immediately thought he'd had a stroke. Then I thought he had possibly tried to escape, didn't make it due to his lame elbow, and broke his back. So I started trying to get him to use his muscles and found that he really had all of his strength and had control over the movement of his limbs. Poor Justin just sat there trying to figure out how this crap happens to us and what in the world we were going to do about it at 11:30 on a Saturday night after we'd each enjoyed a glass of wine. After the initial shock and panic wore off, I realized he had a condition I'd read about when I was trying to figure out what was wrong with our other bunny, Esmeralda... "wry neck" or "head tilt". I didn't know much about it, other than that it exists and that it's a symptom of something else. Not sure what to do at this point, I realized that Enzo hadn't eaten the pellets I'd given him the night before, so whatever went wrong had probably been wrong for about 24 hours or so... and that meant he hadn't had any water in at least that long. So we prioritized getting him some water. I passed Enzo to Justin, gave him the water bottle, and told him I was going to go get on the internet and see what I could find before we started calling emergency vets. Enzo seemed to be very grateful for the water and the security of being secured in Justin's lap, so down I went...

This head-tilt issue... usually it's from something like an ear infection, stroke, trauma, etc. or from a parasite that lives in the kindeys, reproduces, and migrates to other organs after trauma, dehydration or a compromised immune system called E. cuniculi, and when it resides in the brain, causes cysts that can cause, among other issues, head-tilt. The "flopping" issue isn't from loss of strength or control of the body, but a total inability to gain balance since the inner-ear can't regulate if a bun's head is turned 120 degrees to the left. I guess about 80% of rabbits are suspected to have the parasite, but in most cases, it never migrates or causes problems. I assume Enzo picked up the parasite when he was in the vet's office for his elbow, and it just hung out until recently and was probably triggered by the fact that his immune system has been working on fixing his elbow lately... he hasn't been exhibiting signs of an ear infection, didn't seem to have signs of a stroke... so I figured it was probably the parasite. Doing some more research indicated that dehydration can aggravate the growth of the parasite and cause it to accelerate, so I went upstairs and told Justin that this was the most likely scenario.

While I had been gone, Enzo drank a good amount of water and already his eye looked incredibly less buggy and he seemed to be calming down a bit. That he was responding to an increase in hydration also indicated to me that E. cuniculi was most likely the root cause. Once we had calmed ourselves down and satisfied ourselves that Enzo had consumed as much water as he was going to for the time being, we offered him some food (which he rejected) and decided it was best to just make him comfortable enough to rest peacefully until morning when we could reevaluate. In the morning, he seemed slightly better - certainly better than he had been when I first found him. In fact, he had moved himself a little bit around the cage. So we held him, gave him more water, offered him more food and decided to wait until Monday to get in touch with a vet, since all emergency vets are too far away for me to have been able to justify going that far from the hospital. All day Sunday we kept hydrating him, giving him lettuce, and holding him securely, until at least his eyes stopped spinning crazily around like he had just gotten off the Tea Cups. I called Monday, secured a Tuesday appointment, and continued nursing him and trying to keep him comfy. Last night, he seemed almost normal - was drinking on his own, and had eaten some pellets on his own, and this morning, he seemed very much like his old self, with a slightly tilted head that makes him actually very cute. He has a very quizzical look about him at all times right now. Combined with his right paw being held in a "duh" fashion across his chest and it's a very tragically funny sight.

Anyway, took him to the vet, and she agrees with me. Also said that giving him as much water as we have been is probably what's enabled him to come back around so quickly. She's never seen an E. cuniculi case of head-tilt respond so well without drugs in such a short time. So she gave me a 30-day course of anti-parasitic drug and told me he should make a pretty good recovery. Even if he doesn't progress beyond where he is TODAY, he will adapt fairly well and re-learn to walk, run, eat and drink and live a full, happy life. So, the good news is that I am not going to have to deal with 4x daily subcutaneous fluid injections and 4x daily syringe feedings and daily physical therapy sessions etc. to get him healthy again, as some people do. In that case, we'd be sending him to the light, I think. As it is, I was nearly hoping that she'd tell me he's dunzo... but he's not. It's (big) bump in the road, but we can get him back on track...