Dating the Un-date-ables... Part I

See, I'm married.  I have three kids.  My love life is as exciting as watching the Titanic credits over and over until your retinas bleed.

She's a whole different story.  Well, really, lots of different stories.  Stories that I fully intend on telling my daughters when they're of age (or maybe when they're 3... these lessons are worth cementing in their memories, trust me.) so that they may avoid the many tragic romance mistakes Sis has made. 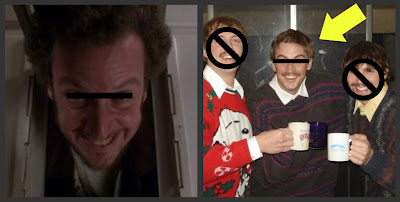 "Putz"* is the guy pointed to by the big yellow arrow (not that his friends aren't also putzes; I don't know them so they're safe for now) and on the left you'll note I've found a photo of Marv from Home Alone.  Yikes.  striking similarities, no? Those eerily arched eyebrows and that come-hither 'stache ("Who wants a mustache ride?") just absolutely scream "sexy".

*Names have been changed to make it a little less obvious.

It's not that Sis is a dog.  On the contrary - she's very pretty and smart and sassy and hip.  (I kinda wish I was as cute as her, but I'd never admit that in person.) 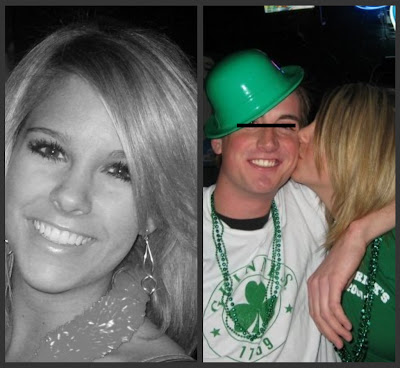 See?  At least the sweet Chester Child Molester 'stache didn't (supposedly; she might be lying - more on that later) show up until after she ditched him.  But look how cute that girl is.

You'll understand in a moment that this is really not even just about the looks (or, rather, the total and utter incompatibility of how they look) but it's so stinkin' much more.  It's even more than the fact that Putz is the same age as her (23) and lives in his mom's basement while he works at Target as a stock boy because he did a year at college and "took some time off to figure out what he really wanted to do" while SHE, meanwhile, was busy graduating from a great school's honors college with two degrees and lining up a killer job in a big city.

She told me about this dude and I immediately told her she was his Sugar Mamma.  I told her to steer clear of him because he was just looking for someone else's basement to live in while he "figured out what he really wanted to do".

Didn't go over so well.  Which is probably why she neglected to reveal to me the following information until long after he was out of the picture (the final straw for her, if you were wondering, was him asking her for money...):

He had a breathalyzer in his car.

Seriously? Sis, seriously?  You let this guy pick you up for your 4th date and you had to sit in the passenger seat while he blew and hummed into a device for several minutes so he could take you out and that didn't automatically trigger a "run the hell away" instinct?  Oy.

I'm not even going to get into the fact that it was the 4th date before he drove.  But Putz had a breathalyzer in his car for an underage DUI.  Quality.

So once Sis clued me in to this particular character flaw, she also felt comfortable enough informing me that "I took some time off school to figure out what I really want to do" actually means, in Putz-speak, "I got an underage DUI and dropped out of college."

For me, that would have been an absolute deal-breaker and there wouldn't have been a 5th date, let alone a 6-month relationship.

And don't assume the sex must have been great to keep her around.

I don't know.  I wish I understood what she was thinking, but it's obvious that she wasn't exactly proud of Putz or she wouldn't have neglected ("Ooops?  Did I forget to mention the breathalyzer? Silly me.") to divulge such amazingly ridiculous facts about him while she was dating him.

In this particular case, all I can do is toss my hands up and shake my head and offer her my shoulder when it's all over and try not to pee my pants laughing at her offer her my deepest sympathies when it doesn't work out.

Coming soon: What To Do When Your Boyfriend Wants to Be You and other tales from dating Mr. Little-Man-Syndrome...
at 3:17 PM

First off, your lil sis is a knockout! Seriously! Beautiful.

Secondly, I dated a couple of choice losers like this. My hubby jokes "It was easy for me to look like such a good guy because you dated such A-holes!" Good point. But he's a nice guy anyhow.

Can't say why I did it either. Maybe it's the whole "bad boy" theory? Hope she finds herself a good man soon!

So glad your sister moved on!

Girl...you are too much! The things us big sisters go through...;o) BTW...I feel sorry that your parents had to put up with two gorgeous daughters! Oy vey! Happy holidays! Miss you!

I'm the same way with my sister right now with her current boyfriend. I just want to shake her and ask her "what the hell are you thinking?!" I can only hope that she wakes up soon and moves on like your sis did!

Your sister is super cute...but you are too, don't kid yourself. I went through my share of idiots to be sure! Maybe for some of us it's a right of passage, who knows? Anyway, I have something for you here when you have a chance to pick it up: http://tinyurl.com/ykcancs

So sorry to hear about the mastitis! I had it, but not that bad, with my oldest when he was about 2 months old (then had a never-ending case of thrush for 3 months!). That had to hurt!

And your ped has to be off with his cold definition. My youngest got his 1st one at 4 months old. My ped did say that kids under 2 don't often get strep, which I had, but definitely said colds are possible. When my oldest had croup, I spent the entire weekend in my bedroom with my youngest to keep him from getting it at 3 months old! Hell of a mom, aren't I?!

you are a good sister!