Right? Gross.  But wait.  Seriously.  Don't laugh - they're actually not only quite yummy, but extremely good for you.  And, though you don't want to overload your kiddo with them (funny story at the end of this post regarding prunes) they're sweet and mix well with lots of other foods and can help maintain digestive health.  Besides, have you READ the nutrition label lately?  They're little food powerhouses with antioxidants galore.  So stop being grossed out and let's make prunes!


I should probably say something about how I wasn't paid and yadda yadda but I'm small-time here and this just so happens to be what our grocery store carries. 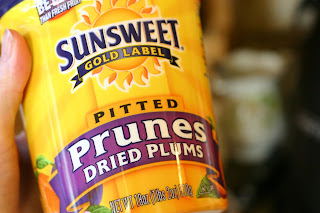 Step 1: Squish the centers of the prunes between your fingers to check for pits.  Though they're pitted, sometimes a pesky pit escapes and plagues your prunes which spells disaster for your puree.  (Rock on, alliteration!)  If you find one, either pick it out, discard the prune or eat it yourself and spit the pit out. 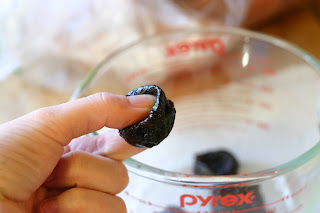 Repeat until you've used about 2/3 of the prunes in the container (this one was an 18 oz. package), and place the prunes in a bowl (or giant measuring cup, as in this case). 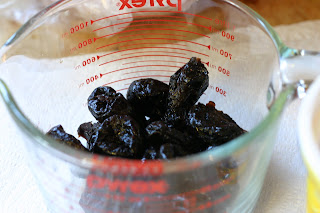 Step 2: Add some water.  I say "some" because it depends really on how many prunes you've got.  But enough to just cover them.  This water is going to be in the puree, so if tap water is an issue for you, use boiled or filtered water. 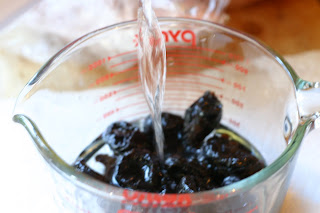 See?  They look gross.  The goal here is to re-hydrate them a little bit.  Makes them softer.  Your blender will thank you.  Throughout this process, actually, it's important to note that prunes are a dried fruit.  You'll see; it comes into play later on. 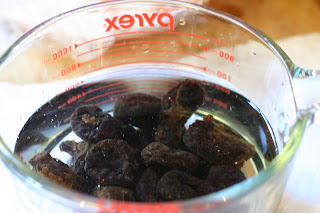 Step 3: Wait.  Wait an hour or two or more until the water is discolored and the prunes are soft and puffy looking.  Basically, they need to get really disgusting to look at.  My husband was repulsed.  It was funny. 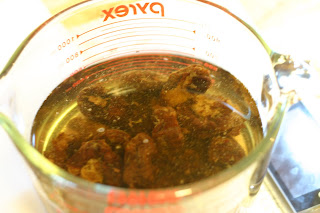 Step 4: Add all the water and a few prunes to your blender and crank it up.  Make sure the lid is on when you turn it on because it can be a bit violent.  You can take it off once it gets going, but watch out for that first surge of action! 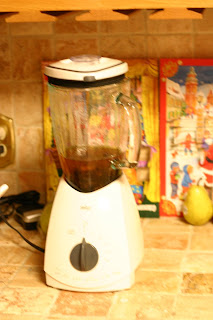 Step 5: Add the re-hydrated prunes a few at a time while the blender is on and let it blend them really well before you add more.  I should also probably mention here that this puree ends up with some small flecks of fruit throughout it, as you can see.  With each addition of fruit, you'll get a darker color. 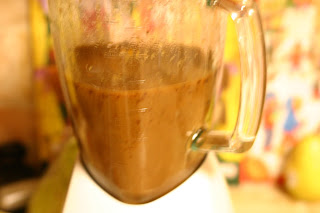 Optional Step 6: Add a few non-re-hydrated prunes (like, directly out of the package) if you finish all your re-hydrated prunes and your puree is still too runny.  Be aware though, pureed prunes will continue to thicken slightly for a time, and adding non-re-hydrated prunes will intensify that phenomenon. Let me explain.  Because the prunes are dried, you soak them in water and the cells start to puff back up.  If you chop the prunes up, as in a blender, you expose more cells to water so eventually you end up with a really thick goo of plump prune cells.   Okay I'm not a scientist, but you get the gist.  So when you're adding additional prunes (if you decide to do so) make sure you blend it to a step or two below your desired thickness and call it quits or you're going to end up needing to thin it out later.  The finished product should be about the same color as milk chocolate. 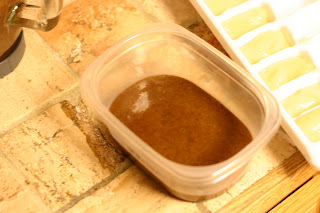 Prune puree also doesn't freeze well... That is, I've never gotten it to work well in the ice-cube trays.  If you've got those cool storage cubes, go for it.  But they don't really freeze solid so you can't so much pop them back out of the trays.  So I freeze it in regular plastic containers in quantities that will last me about 3 days and just take them out of the freezer and put them in the fridge when I empty a container.  That way, I've always got some on hand.  They seem to go really well with sweet potatoes, and my girls have enjoyed them mixed with a mashed banana and oatmeal for breakfast.

Now, here's the promised funny story.  Hopefully Justin won't read this; he'll kill me.  But I'm a risk-taker like that.  So.

One year, we were down in Orlando with his family.  We went to the store to stock up on some snack foods to enjoy in the time-share villa they've got and we happened upon the packaged fruit aisle where I grabbed a box of raisins and some banana chips to munch on. Justin saw a bag that said, "Cherry Flavored Dried Plums" and said, "Wow! Yum!  I like cherries AND plums - score!"  I raised an eyebrow but figured that my man knew what he was doing.  Back at our place, we all opened up our snacks and headed to the pool to read and relax.  Not much later, I heard him crumple up his bag and saw him toss it in the garbage.  "What's wrong, you didn't like them?"  Justin: "No, they were delicious!  I just finished them all... sorry, did you want one?"  Me: "Uh... the whole thing?"  Justin: "Yep.  Why?"  Me: "Hon, you just ate a pound of prunes... you sure that was a good idea?"  Justin: "What are you talking about?  Those were cherry flavored dried..."  Me: "...plums.  Right.  I got it.  What do you think a prune is, Just?  A prune is a dried plum.  And they make you poop."  At this point, realization set in and Justin's face blanched.  Sure enough, a few hours later he disappeared into the bathroom in the villa and no one knew where he had gone until the tell-tale smell alerted us to the fact that the dried plums were indeed doing their work.  Several hours later, a very pale and visibly shaky Justin emerged to gales of laughter looks of pity and understanding.  Now, you can bet he knows what a prune is and you know he only eats a few at a time.

I nominated you! It's explained over at my blog. Feel free to ignore-I do about 1/2 of them!

Love love LOVE the "funny story"...which is even funnier since I KNOW Justin!! Boys really ARE stupid sometimes.... Before Thanksgiving, on one of our phone calls from the desert, I asked Patrick what his favorite Thanksgiving food was. He replied that it was a toss up between stuffing and dressing! I, of course, reply with, "Huh? They're the same thing." Patrick declares, in the most serious tone I've heard him use, "No they aren't; one's for inside the turkey and one goes over the potatoes." I taught him about gravy shortly thereafter!!! :-)

So THAT's how you make prunes for babies! Both my boys like them (or at least, my oldest USED to). My uncle thought I was feeding them chocolate when he saw the pictures of pruney-yumminess all over their faces. As if! ;-)

Pu-hahahahahahaha. I gotta let Sean know about this...sounds like something he would do...or doo...hahaha. Sorry. Man, I need to get out of the house soon.

Nice fill someone in on and this enter helped me alot in my college assignement. Thank you as your information.

gallagherfam.blogspot.com; You saved my day again.