Well, it's time.  Time to get my girls going on some legitimate protein.  Obvious choice?  Chicken.  I mean, there's protein in peas and of course in breast-milk or formula and some in the cereals they eat, but let's kick this up a bit.  Let's give them meat.

Intimidating, right?  Don't be scared - it's not much different from any other puree we've done so far.  In fact, it's easier than some (uh, anyone forget how much of a pain it was to strain those peas?  I didn't.) and serves as a great base for mixing some yummy dinners.


Step 1: Obtain chicken.  I selected chicken thighs in part because they're absurdly cheap and mostly because a) they're dark meat and therefore more moist and flavorful than the breasts and b) they're pretty easy to work with.  I used 2 packages.  I'm a fool - my daughters are intense eating machines so I could have easily made about 9 packages and not have over-done it. 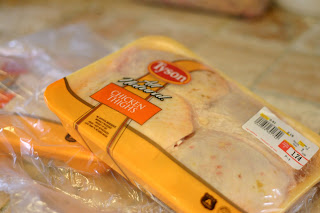 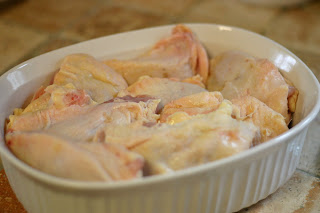 They should be done all the way through - I used a meat thermometer to double check.

*Optional step: Reserve all the juices the chicken produces while cooking.  I pour it from the baking dish into a large measuring cup and let it sit on my cold counter top for awhile so the fat separates into a layer on top.  I skim it off and hang onto the leaner juice that remains to add to the puree in addition to the water I'll add because it lends a bit more flavor. 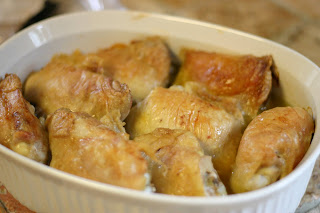 Step 3: Remove and discard the skins and any excess fat you don't want to serve your kiddo and remove the meat from the bones.  There's no particular method here and it doesn't need to look pretty. 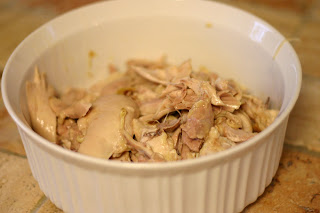 Step 4: Blend.  But "blend" is not quite that simple.  You can't just put the chicken in the blender, hit "puree" and go... It takes a little more finesse.  The best way to achieve a good chicken puree is to add a couple of chunks of meat and a good 1/2 cup of that leftover juice, blend that up and slowly add more chicken, alternating chicken and liquid as you go, otherwise you're going to gum up the works and fry your blender (speaking from tragic personal experience).  I also recommend blending your chicken - if you make 2 packages of thighs like I did - in two batches. 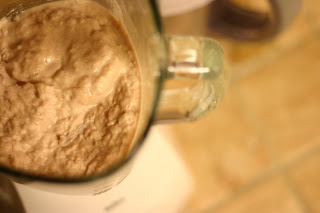 It looks disgusting.  No doubt about that.  And you shouldn't try this one if your child isn't huge on texture yet... it's pretty hard to get a perfectly smooth meat puree.  And it's important that I point out that a puree of chicken will freeze nicely but thaw a little roughly.  It just doesn't reconstitute into the smooth texture you put into the freezer.  It was a huge turn-off for my son, but I'd just mix it with peas and sweet potatoes or with some apple puree and he didn't even notice that his chicken was a little grainy.  My girls would eat a drumstick if I let them, so they don't care.  Just make sure you check all of your baby food for lumps before you begin feeding your child so that they don't choke on a hidden chunk. 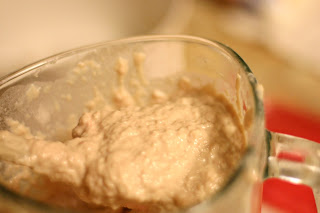 It doesn't smell too bad... and when they get a little older I'll "season" it with a touch of garlic and a teeny bit of black pepper and it doesn't taste bad at all! 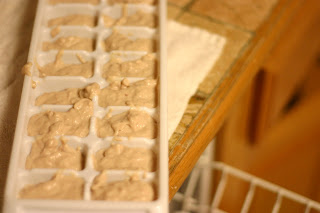 Looks like we're starting proteins with the kid(s) at the same time. But I have never made my own pureed meat. Not sure if I will try this - I already HATE working with turkey and chicken. I mean, I will, but it grosses me out. But maybe I should try this!!!

I seasoned mine with garlic too! Sometimes I even used onion powder with Colton...he liked that a lot. By the way...one more great thing about you using dark meat, is that it has a higher iron content which is expecially good for breastfeeding babes ;)

I hope you know that I don't make a habit of spelling especially with an "x". WTF? Seriously, of course I had to do that.