Okay I am obsessed OBSESSED OBSESSED with wheat germ.

But I LOVE it.  I add it to all the babies' purees now.  I mix it into every possible recipe I can.  I sprinkle it on salads and on diced fruits for the girls.  I sneak it into PB&J sandwiches.  I love wheat germ.

Nope, germ is short for "germination" and refers to the fact that wheat germ is like a wheat kernel embryo.  It's just where new wheat kernels sprout and is super rich in nutrients like... oh, EVERYTHING.  Nutrients such as B vitamins (folate, niacin, thiamin, and vitamin B6), Calcium, Fiber, Iron, Omega-3's, Potassium, Magnesium, Manganese, Phosphorous, Protein, Selenium, Zinc and Vitamin E.  Wow.

And it's not technically a food.

Wheat germ comes in two basic varieties: raw and toasted.  I use toasted for a few reasons: 1) it tastes better, 2) it's easier to find, and 3) it lasts a little longer.  The toasted wheat germ has a light nutty taste to it that all but disappears from notice in things like sandwiches and salads or even in meatloaf or meat balls, and it lends a little somethin'-somethin' to oatmeal or waffles or muffins or cookies.  The only real key thing is, you have to store that stuff in either the freezer or fridge so it doesn't go wonky on you. 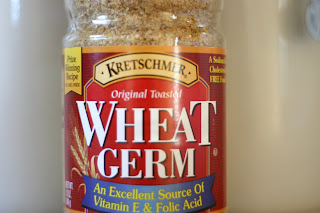 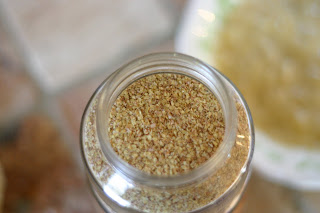 So in addition to mixing in in with whatever breadcrumbs I might use in a recipe, such as this one, you can just add it into cookie or muffin recipes or swap out 1/2 cup of the flour in the recipe for 1/2 cup of wheat germ, for instance.  I also made breakfast for the girls the other day by mashing up a banana: 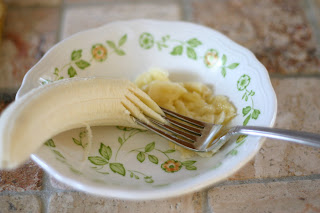 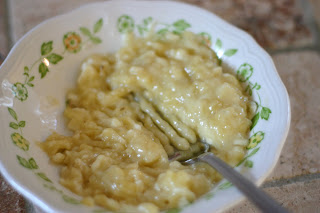 And stirring in a couple tablespoons of wheat germ to get this: 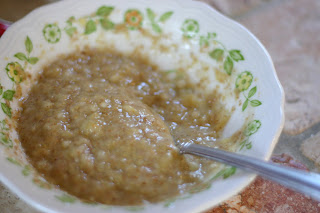 It may look gross, but it was really yummy.  It cuts down on the "snot factor" as I call it... Bananas, when mushed, are a little slimy and my kids aren't huge fans of the texture, but the wheat germ gives it some grit (insert manly chuckle here).  I tasted it and determined it was quite tasty, so I later did the same thing for myself but smeared it on a piece of bread and smushed that on top of another piece of bread that I'd coated with peanut butter and I thought I was in heaven.  Then, I tossed some mini chocolate chips into the sandwich when I realized how awesome the "banana jelly" was and essentially considered myself a genius at that point.  Now, did the wheat germ make that heavenly sandwich?  No.  Not at all.  BUT it was there and I was able to use its presence to justify eating a sandwich made with chocolate chips and not feel in the least bad about it.
Okay, so maybe to some wheat germ is a nutritional supplement.  To me, however, it is probably more of a crutch.
Whatever.  I'm lactating.  Back off.
Anyway, so there you have it.  I *heart* wheat germ.  And I make no qualms about the fact that it goes in mac 'n cheese and into my home-made pizza crusts and into the breading on my chicken nuggets and it holds my hamburgers together so if my picky kid only takes one stinking bite of something I toiled for hours to make, at least that one bite has as much goodness as I can feasibly pack into it.
at 10:19 PM

I am curious now to try it out. I am all about making our everyday foods healthier. I avoided wheat like plague the last four years because of adult on-set of Non-Celiac Gluten Intolerance. But now that I "grew out" out of it I have been inhaling anything with wheat, flour and oats in it.
Vera

You ARE my sister from another mister! I *heart* wheat germ too! But...I may love flax even more...hope you all are feeling better!

I want to have a shirt made for you that says "I Love Wheat Germ".

Will you wear it? Promise??

I still think it's gross. I only use it if the recipe calls for it.

However, I did find my recipes for healthy cookies, so I try a little wheat germ with those, just for kicks.

I am also a huge fan. If you love wheat germ, you've gotta start experimenting with ground flaxseed. It can be added to stuff like wheat germ can, but I usually use it in baking as a butter/oil substitute, because it's high in fat but it's all omega-3s. You have to find another moistener (ugh, what a grohlss word) for things like banana bread (I use milk or applesauce) because it's not liquid like oil, but it's worth it. The Bob's Red Mill package of ground flaxseed has a muffin recipe on it that I absolutely LOVE, and I bet you would, too.

So glad I saw this post, I'm going to pick some up on the way home! Thanks!